On a recent multi-day hike on Mount Rainier National Parks, Wonderland trail, we were treated on day 1, with the site of a mountain goat Kid, and what I assume to be its Nannie, as seen close up in the first photo on the left.  The center photo shows a wider view of the two mountain goats on the move through the breathtaking high alpine zone, of what is known as the Berkeley Park area, in the North East section of the Wonderland trail, in Mount Rainier National Park, U.S.A. The Mountain, with the summit capped in thick, undulating white clouds, is poking out behind the Burroughs mountain ridge in the foreground. In the third photo on the right, you can see we were in fact treated to the site of an entire herd of mountain goats, properly known as goat-antelopes. Another Wonderland hiker we crossed paths with shortly after our encounter informed us he had counted over thirty in the herd from his excellent vantage point a few hundred yards away. Learn more about North Americas Mountain Goats by clicking on this link to Wikipedia
*Click on the photo circles for a higher resolution look* 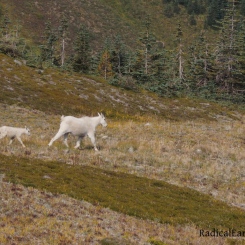 A Nannie mountain goat, and her kid, on the move

A wide view of a Nannie and Kid, mountain goat on the move in Mount Rainiers, Berkeley Park area